Just last month, on August 4, a man attempted to rob a Melbourne, Florida church during a sermon by holding a gun to the head of a 72 year old woman worshiper. He was subdued and was arrested and booked into jail.  It ended with no deaths or injuries, just a visibly shaken congregation. That is a success. But sadly, it doesn’t always end this way.

Last summer, a JD Gallop poll found that “The number of deadly episodes at sanctuaries has soared over the last decade, and mass shootings at schools, malls and movie theaters have left Americans feeling like it could happen anywhere.” That statement foretold the horrific shootings at a North Charleston Church earlier this year.

In 1999, there were 22 violent deaths reported at worship centers nationwide.  In 2013, there were 115 attacks, with 75 of those ending in a fatality. Incidents of violence in churches is rising as churches are considered one of the few soft targets left, but there are ways to be prepared. 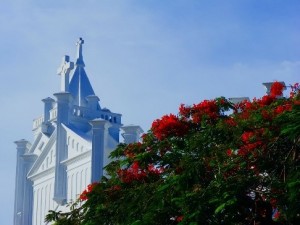 For pastors, priests, rabbis, religious leaders, teachers, and their staff members, security and safety should be on top of their minds. Churches, and other houses of worship face a unique set of security challenges and are all subject to crime and violence. Church Security and Safety should be a priority in all Churches and Houses of Worship. If not, security plans and improvements will not be made, leading to vulnerability, and when you least expect it, an event occurs.

Rather than being proactive with formalized security plans in place, lack of planning for a church or improper reaction a violent event at a church can lead to various levels of misery and grief for some and liability resulting in costly legal proceedings for others. The purpose of a church security analysis and training is to raise church security awareness to help plan for and reduce risks and threats and increase security and safety for everyone.

While there is no assurance that a violent episode in church can be avoided, you can be prepared for the possibility of an incident occurring and controlling it with the addition of qualified, professional security personnel from ESS Global Corp.

Pastor White summed up both the need and the completeness of our services.

“As a large church in the Tampa Bay community, the safety and security of the attending congregation is held in the highest regards, which should never be marginalized as a second thought. One of the greatest aspects of the training was the full assurance of complete understanding before introducing any new concepts, terminology, or practical application revealed the desire your team has to help others in achieving their goals. In addition, you have gone above and beyond by offering your services for future follow up sessions to ensure proper implementation, which is a genuine characteristic of both your integrity and ethical uprightness.”

By taking responsibility for the safety of your church with “faith based” security, you will have done